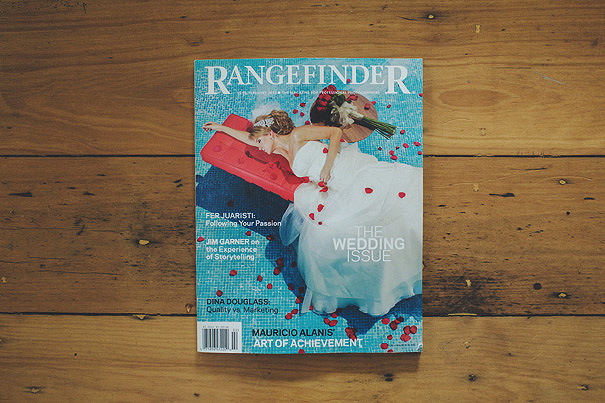 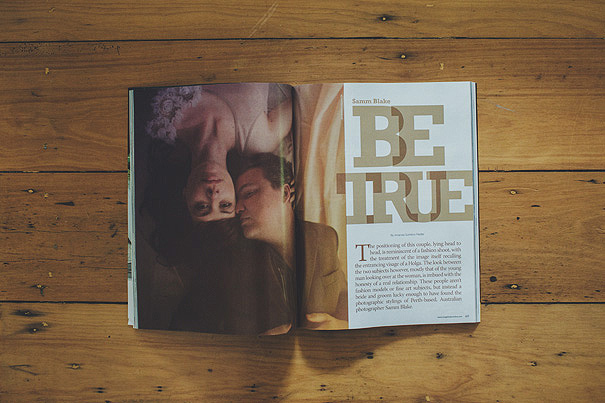 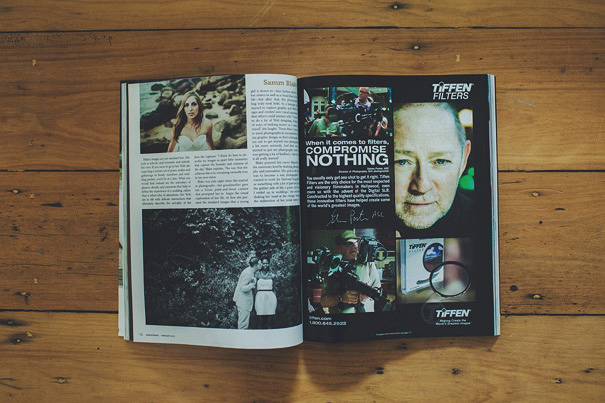 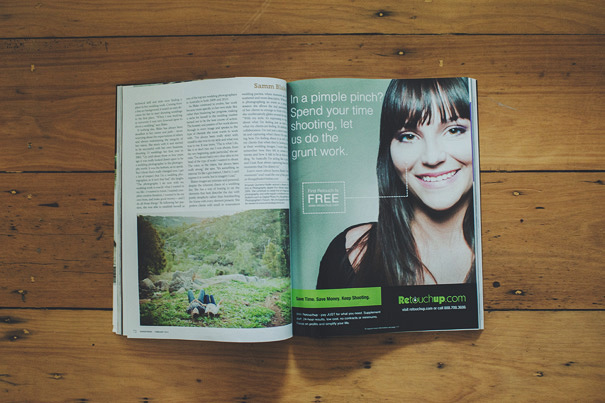 When I was starting out in weddings, I had this goal to one day be published in Rangefinder Magazine. Its an American photography magazine that has a huge distribution around the world. Very happy to say, it has become a reality. I was interviewed and featured in the February 2012 of Rangefinder Magazine. I was interviewed by Amanda Quintenz-Fiedler. The following text is the article she put together for Rangefinder magazine. I liked how and very thankful for, how she put all my random rambles together and made sense of it all to produce the following article.

Written by Amanda Quintenz-Fiedler for Rangefinder.

February 01, 2012 — The positioning of this couple, lying head to head, is reminiscent of a fashion shoot, with the treatment of the image itself recalling the entrancing visage of a Holga. The look between the two subjects however, mostly that of the young man looking over at the woman, is imbued with the honesty of a real relationship. These people aren’t fashion models or fine art subjects, but instead a bride and groom lucky enough to have found the photographic stylings of Melbourne-based, Australian photographer Samm Blake.

Blake’s images are not standard fare. Her style is eclectic and romantic and entirely her own. If you were to go to her Web site expecting a certain set of poses, smiles and gatherings of family members and wedding parties, you’d be at a loss. What you would find instead are the interplays of glances, details, and moments that help to define the experience of a wedding, rather than a who’s who of attendants. Her Web site is rife with delicate interactions that ultimately describe the actuality of the lives she captures. “I think it’s best to describe my images as quiet little moments that capture the honesty and realness of the day,” Blake explains. The way that she achieves this is by remaining earnestly true to her own vision.

Blake was only eight when she started in photography—her grandmother gave her a 35mm point-and-shoot camera that prompted her to  begin the visual exploration of her life. At first she pursued the standard images that a young girl is drawn to—faux fashion shoots of her sisters as well as a visual diary of her life—but after that, the photographic bug truly took hold. As a teenager, she started to explore graphic and Web design and created new visual experiences that others could interact with. “I started to do a lot of Web designing, thinking of ways of making money so I could go travel,” she laughs. “From there, I started to need photographs to incorporate into my graphic design, so that’s what pushed me out to get started into photography a bit more seriously. And then once I started to put my photography online, I was getting a lot of feedback—that’s how it all really started.”

Blake pursued her career diligently at the university level by studying photography and journalism. Her goal at the time was to become a war photographer. “I wanted to work for National Geographic or something with a lot of gore and guts; the grittier side of life, I guess. And then I ended up in weddings,” she exclaims, shaking her head at the change. Despite the redirection of her initial intent, her technical skill and style were finding a place in her wedding work. Coming from a fine art background, it wasn’t an easy decision for her to start shooting weddings in the first place. “When I was studying at university it was very frowned upon to shoot a wedding,” says Blake.

If nothing else, Blake has always been steadfast in her career and path— never worrying about the expectations of others and always maintaining the integrity of her vision. She stuck with it and started to be successful with her own business, shooting 15 weddings her first year in 2003. “Up until about three or four years ago it was really looked down upon to be a wedding photographer in the photography world. It was the bottom, so to speak. But I think that’s really changed now. I get a lot of respect that I’m a wedding photographer, so it isn’t that bad,” she laughs. “The photography I do now with my wedding work is exactly what I wanted in my life—I wanted to travel, I wanted complete creative freedom, I wanted to be my own boss, and make good money— and I do all those things.” By following her passion, she was able to establish herself as one of the top ten wedding photographers in Australia in both 2009 and 2010.

As Blake continued to evolve, her work became more specific to her own style. But rather than hindering her progress, making a niche for herself in the wedding market turned out to be the best course of action. The honesty and passion of her work shows through in every image and speaks to the type of clientele she most wants to work with. “I’ve always been really strict with myself to stay true to my style and what was true to me. It was more, ‘This is what I do, like it or don’t hire me.’ I was always, from the very beginning, quite particular,” she admits. “I’ve always had a very clear idea in my head of the type of work I wanted to shoot. The voice, or the vision, has always been really strong,” she says. “It’s something so internal. It’s like a gut instinct. I feel it, I can’t express it in words, but in imagery I can.”

Blakes images are intimate and personal, despite the inherent chaos of a wedding day. She has a way of honing in on the elements that best describe the day with poetic simplicity rather than bombarding the frame with every element present. She prefers clients with small or nonexistent wedding parties, where moments are less scattered and more descriptive. When she is photographing an event or a portrait session she allows the real personalities of her clients to emerge in front of her as she unobtrusively glides around the space. “With my style, it’s expressing so much about what I’m feeling just as much as what my clients are feeling. It’s definitely a collaboration. I’m not just a strict journalist and capturing what’s there; I’m capturing how I’m feeling about it as well. I tell my clients that when they’re looking back at their wedding images, I want them to remember how they felt in certain moments and how it felt to be at their wedding. So basically I’m acting like a guest, and I just float about capturing these little moments that I’m drawn to.”

The little moments she finds are universally representative of the love, romance, and connection that her clients clearly feel. How she came to be able to follow those moments comes in part from her own tenacious claim to maintaining her own style and her honest dedication to knowing who she is in her photography, something that wasn’t always easy for her. “I think the biggest struggle photographers have, and I know I experienced this in certain phases as well and that’s why I definitely understand it,” she concedes, is that “young photographers get so confused about what style of photography they should be in to. They go and experiment in everything. And that’s good, because it’s good to find out what particular style you do like, but there is no consistency in their work. One week they might shoot like one photographer, and then the next week they’re shooting like another photographer,” she explains. “It comes across as quite obvious. The best advice is to shoot for your own heart. And that can be daunting or confusing because you’re not sure what’s in your heart or how to stay true to yourself.”

Rather than just pursuing her technical evolution, Blake was very conscious of doing her best to find out who she was so that her own emotions and perspective could be accurately portrayed in her photography. It seems the more she knows who she is, the more universally appealing her images be-come. When she is at odds with herself or unsure of her own artistic vision, she feels her work shows it. “How I am feeling and how I interact with people is so crucial to how my photography looks and the end result. A lot of people are not in tune and aware of that relationship. They just go out and shoot and are not paying attention to themselves.” It is a pitfall that Blake believes negatively affects their resulting images – pre-venting the photographer from being present in their own im-ages.

She wholeheartedly believes that staying true to yourself and your personal vision is the only way to continue to make relevant art, no matter the genre of your photography. To that end, she has been asked to speak at several workshops both in Australia as well as internationally, focusing her talks on helping photographers determine who they are. Her speaking engagements guide photographers in overcoming their creative blocks and insecurities about pursing the photography that will be the most fulfilling to them and rewarding for their clients. “I’m really, really enjoying it and really excited about where it’s going to take me. I love teaching and the feedback I’ve been getting is such a lovely feeling,” she says. “I don’t teach photography, as such. I’m teaching about resistance as an artist and creative blocks that photographers face.” The reason she can teach these concepts is that she went through them herself and she wants to help others avoid the arduous process of get-ting through to themselves. “I went through it all. I just want to give people the quick ten-step guide so that they don’t have to go through it as much. But it’s crucial that you go through them,” she admits, and she wants to help people find out what their personal resistance is in their photography. “What’s stopping you from going out and producing your work?”

Now that she can see her own resistance plainly, she can help others to see past theirs, and can continue to create her own work without obstacles. Her philosophy in all these aspects hasn’t changed – find out who you are, be true to your-self, and your images will show it.